The Princess Margaret (later the Countess of Snowden)

Elizabeth Angela Marguerite Bowes-Lyon later styled as Queen Elizabeth, The Queen Mother (once Queen Elizabeth) is the Queen consort to George VI and mother to Elizabeth II and Princess Margaret. In Season One and Season Two, she is played by Victoria Hamilton, and in Season Three and Season Four by Marion Bailey.

Elizabeth Bowes-Lyon was born 4 August 1900 of British nobility. In 1921, the then Duke of York, "Bertie" proposed to Elizabeth but she turned him down being "afraid never, never again to be free to think, speak and act as I feel I really ought to". In 1922, Bertie proposed again but she refused him. In 1923, Elizabeth accepted the third proposition of engagement and married the Duke of York on 26 April 1923, at Westminster Abbey, becoming Her Royal Highness Duchess of York. At the time the marriage was considered a symbol of modernisation; previously, princes were expected to marry princesses from other royal families.

Eventually Elizabeth, her husband and her daughters came to represent the traditional British values of public service and family. They were seen often to be in opposition to Edward, the Prince of Wales and his 'playboy' life. On 20 January 1936, George V died and Albert's brother, Edward, Prince of Wales, became King Edward VIII. George had expressed private reservations about his successor, reportedly saying, "I pray God that my eldest son will never marry and that nothing will come between Bertie and Lilibet and the throne." Months into his reign, Edward VIII faced a constitutional crisis insisting on marrying the American divorcée Wallis Simpson. In 1936, Edward VIII abdicated the throne, thrusting Bertie and Elizabeth into the spotlight. George VI and Elizabeth were crowned King and Queen of Great Britain, Ireland and the British Dominions, and Emperor and Empress of India in Westminster Abbey on 12 May 1937.

The divide between George VI with Elizabeth and Edward, Duke of Windsor widened. Queen Elizabeth was later quoted as referring to the Duchess as "that woman", and the Duchess referred to Elizabeth as "cookie", because of her supposed resemblance to a fat common Scots cook. In her role as Queen consort to George VI, Queen Elizabeth took a particularly notable role, supporting him and taking on much responsibility. During the war years, Queen Elizabeth and George VI became symbols of strength for the country. Indeed, Adolf Hitler once described her as "the most dangerous woman in Europe".

With her daughter as Queen, Elizabeth acts as counsellor of state and home to the young Elizabeth and a leading member of the Windsor family. She watches as the crown is led into the late 1950's and early 1960's, and the royal family authority dwindles. As Prince Philip continues to struggle with his restrained position as a royal, Elizabeth encourages her daughter to send him on a royal tour, giving him perspective and a meaningful role. Elizabeth attempts to encourage her daughter Princess Margaret to find a husband, after being forced to end her relationship with Peter Townsend. In 1957, Elizabet expresses outrage after Lord Altrincham publishes criticisms of her daughter and watches as her daughter is forced to 'open up' to the country, performing the first televised Christmas broadcast. She later expresses embarrassment of the dwindling authority of the royal family. In 1957, a damning secret of the royal family concerning Prince Edward, Duke of Windsor is brought to light with the Marburg Files, which Elizabeth helps deal with. In 1964, Queen Elizabeth sits with the rest of her family in a royal photograph shortly after the birth of her grandson Prince Edward.

A now older Elizabeth continues with her royal duties as Queen Mother, beloved by the nation and affectionally known as 'The Queen Mum'. Queen Elizabeth takes more of a back seat in the storyline, but has taken on the mantle of 'matriarch' of the Windsor family. As her daughter's marriage to Anthony Armstrong-Jones dissolves, Queen Elizabeth and the rest of the royal seemingly side with Tony. Later in 1966, Queen Elizabeth reacts with tears in her eyes to the news of the crisis at Aberfan. She is later present during the family's watching of the 1969 moon landing on television. After the death of Prince Edward, Duke of Windsor, Queen Elizabeth attends his funeral, acting in a hostile manner to Wallis Simpson. As her grandson Prince Charles enters into a complicated relationship with a young Camilla Shand, Queen Elizabeth, along with Louis Mountbatten take an active role in interfering, breaking off his relationship with a young Camilla Shand by organising a posting for him abroad and suggesting a marriage between Camilla and Andrew Parker-Bowles. In 1977, Queen Elizabeth is outraged as a scandal occurs when the paparazzi take a photo of Princess Margaret in her affair with Roddy Llewellyn. Queen Elizabeth later reacts to Princess Margaret's suicide attempt calling it a "cri de coeur" meaning a "cry for help" rather than a genuine suicide attempt.

As Elizabeth enters her eighties, she worries with the rest of the firm about the status of Charles, Prince of Wales' love-life but is encouraged when he turns his attentions to Diana Spencer, the granddaughter of her lady-in-waiting and close friend Lady Ruth Fermoy. In 1979, Queen Elizabeth, along with the rest of the royal family, travels to Balmoral also inviting Prime Minister Margaret Thatcher and later Diana Spencer to join them. Queen Elizabeth plays Ibble Dibble toasting a drink with "tippity toppity down with the Nazis". Queen Elizabeth receives a phone call from Elizabeth II telling her about the happy news of Charles' engagement to Diana. After Princess Margaret expresses doubt over forcing the marriage, Queen Elizabeth encourages her daughter Elizabeth II to continue with the match. In 1987, Princess Margaret discovers the Queen Mother's actions of hiding away her two cousins, Nerissa and Katherine Bowes-Lyon, fearing their disabilities would weaken the status of 'the hereditary principle'. After stories of Diana's struggles with Bulimia and her continued resistance to the constraints of royal life reach Princess Margaret, Elizabeth II and Queen Elizabeth, Elizabeth describes Diana as "a silly immature girl, who will, with time give up her fight and bend, just as Philip did". In 1990, now ninety-years-old Queen Elizabeth gathers with the rest of the royal family for Christmas at Balmoral and sits to be photographed.

Cecil Beaton once described the real Queen Elizabeth as "a marshmallow made on a welding machine" in reference to the Queen's contradictory personality - gentle, warm, and fun-loving, but at the same time sharp, steely, remote, and certainly not to be underestimated. Indeed, Adolf Hitler described her as "the most dangerous woman in Europe".

The Crown depicts Queen Elizabeth, the Queen Mother as a supportive, caring, and warm wife to George VI. She is also an involved and warm mother to Princess Elizabeth and Princess Margaret, and a good grandmother to Prince Charles and Princess Anne. She is intelligent, savvy to the intricacies of court life, and is very charismatic and skilled in her role as Queen consort. Throughout the series, the Queen Mother sometimes shows her more fun-loving side, seen leading a conga at Princess Margaret's engagement party, remarking "everything improves with a drink" in Season Three, and playing ibble-dibble in Season Four. 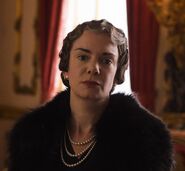